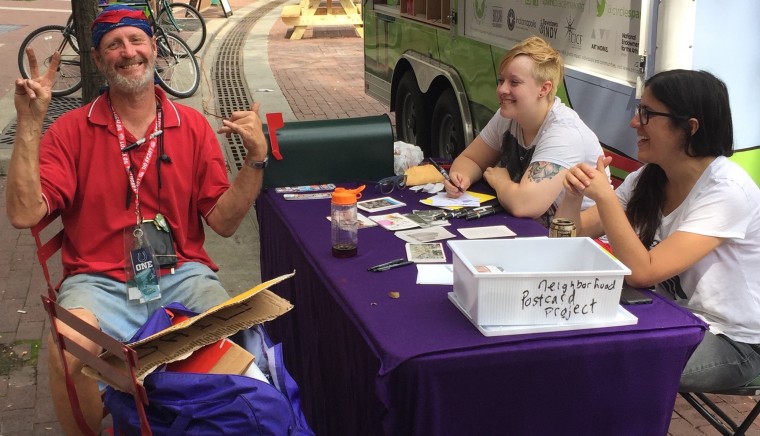 How Rick Cecil McElroy showed me what Spark was about

“…Whatever last Thursday was, what was that?” asked Rick. We immediately asked if he referred to the date. I had just started to record and he began to tell me about his Circle Spark experience. “Yeah… Like ten days ago…” He said, referring to when he first noticed the changes on the Circle.

Rick Cecil McElroy is a multi-generational native of Indianapolis and a proud American. Rick is also homeless. “What does that say?” Rick asked me as he pointed at his ID’s address. It stated: 55 Monument Circle, Suite 1324. He laughed, as if to let us know how ironic it was.

Rick had approached the Circle Spark postcard table last Sunday (my new home on Sundays, as you may have read in my India Day story). I was busy chatting with Emma, my companion for the day, when Rick approached us. “Hey! Want to send a postcard?” We asked him enthusiastically as he walked towards us.

He quickly chose a USS Indianapolis postcard and asked us what year Japan surrendered. “No! 1945,” he corrected us as soon as we answered.

Rick was a tall, slender guy in his early sixties. He has blondish-gray hair and a short beard. He had a smile from ear to ear, with an overall free, almost youthful presence. My introduction to him was a bit brash with a humiliating history fail, but the conversation that followed and his sweet, yet brisk personality soon made him just another friend.

He told us about his father and grandfather, and their involvement in foreign wars. as well as about the Marines. “First to fight, last to leave,” he said several times. His patriotism wasn’t overbearing, though. I have to insist on how charismatic he was and how he was continuously giving credit where credit was due. Whether it was in the way he talked about World War II or anything else, he insisted on naming and describing everyone involved in every anecdote he told as accurately as he possible could.

“This morning I was down here early because I watch Star news, let’s see, at South…” He paused, turned around and pointed at the Emmis building, “…Channel 6 is on, so I need to know what time it is, because I’m blind anyway, so I have to get real close to see it,” he continued. “…the trees ‘er lit up and I said, ‘Right on!’ Because I don’t remember that until Thanksgiving and then this was all set up,” Rick pointed to the Circle Spark parklets. This was his response to what he thought about the Circle Spark changes on Monument Circle, as a regular and as a resident. I was initially thrown off by his lack of enthusiasm, but the more we spoke, the more I understood why he had answered like that.

“Church also gives coffee every Sunday for homeless people, until 8:30…” He referred to Christ Church Cathedral. “And also, that church is the only one that recognizes the homeless, the 20th day, every December,” Rick said with a somber voice. He was talking about the Coalition for Homeless Intervention and Prevention’s (CHIP) annual Homeless Persons’ Memorial held on, “the first day of winter each year to bring attention to the plight of our homeless neighbors,” as stated on CHIP’s website.

“This you need to have recorded, because they are very beautiful people, and also The PourHouse, which is my address…” Rick had such a gracious and somewhat rough way of describing all of this. He told us about Andrea De Mink, the Founder and Executive Director of The PourHouse, whom he had known for 12 years. He said that De Mink had invited him to her wedding while he was in rehab, and he said so as if he were letting us know the kind of person De Mink was. He also seemed to beam at the mere fact that someone like her believed in him, especially during a difficult time. “She’s helped me handle this fist… and her husband, great guy, great guy…”

A visitor in his mid-twenties came to the table as I continued to interview Rick. He was there to send a couple postcards. “Here you go, young man,” Rick said to the new postcard table visitor, “Pull up a chair.” He immediately continued to tell me about De Mink and quickly interjected the young man’s postcard selection. “Here’s a good one!” He said, as he pointed to a postcard, “That’s the Indianapolis… That’s the Indianapolis, bro.” He laughed hysterically and said, “That’s a keeper!”

More people began to approach us and it became harder to continue our makeshift interview. I asked him again about how Circle Spark had affected him, and selfishly hoped that he would answer something more than what he had said before. “Well, I’m going to say this and I mean this honestly: there are panhandlers and there are people in need. People in need know how to improvise, adapt, overcome [pain] in order to obtain [the necessary resources] to survive… And that’s all you gotta do! Improvise, adapt and overcome! I got that from the Marines Corps,” Rick concluded. I was still thrown off and I felt as if he had avoided my question.

Still, he told us more stories about his life as an Indianapolis native, as a Juggalo (yes, Rick is an Insane Clown Posse fan), and other curious little bits about his life that were a unique reflection of our city and its people. Rick, a Marine vet who once lived three blocks away from Market Square Arena, a disappeared icon in Indianapolis history, and alleged that he had a fake ID that said he was 40 when he was only 15 (he proudly said he used it to go to bars and get a job), left us after over thirty minutes of nonstop conversation.

As he walked away, I understood that it didn’t really matter that Rick didn’t have something incredibly profound to say about Circle Spark. We had already fulfilled the purpose of the project as we sat there, together, and got to know each other. Under no other circumstance would I have had the unburdened opportunity to meet Rick Cecil McElroy and make a new friend.