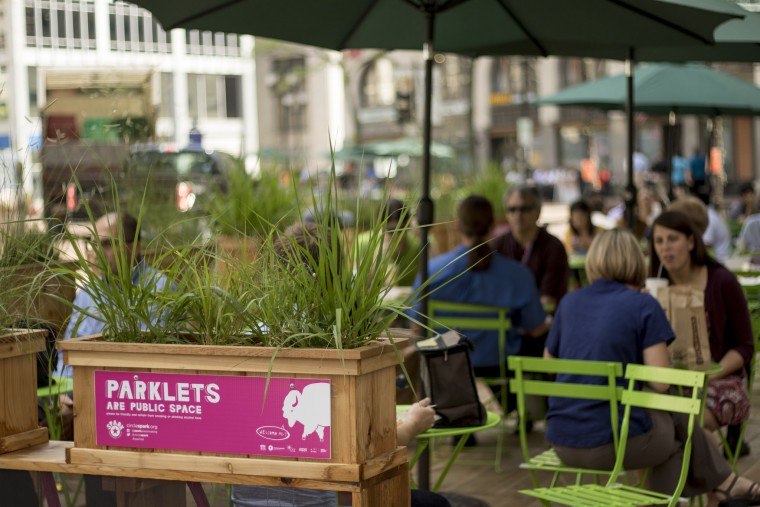 Big Car Collaborative — the nonprofit organization currently teaming up with The City of Indianapolis on the Spark Monument Circle project — is organizing the series in partnership with Reconnecting to Our Waterways, Local Initiatives Support Corporation, and others.

Placemaking is a buzzword that could be used to describe initiatives such as Spark and Rethink Reconnect Reclaim, but what in the world is placemaking? And why should we care about it?

A Project for Public Space article offered this helpful explanation: “A bike lane is not Placemaking; neither is a market, a hand-painted crosswalk, public art, a parklet, or a new development. Placemaking is not the end product, but a means to an end. It is the process by which a community defines its own priorities.”

The assumption is that urban designers and politicians aren’t the only ones who have opinions and ideas about the places in which they live. Because Indianapolis residents all have an interest in it being a good place to live and work, placemaking projects like Rethink Reconnect Reclaim offer opportunities to participate in a process of imagining about place and experimenting in it.

Cara Courage, a United Kingdom-based academic, artist, and placemaker, recently told me that cities need to work with residents “beyond the consultation level loved by planners and developers.” Residents should be respected and listened to, Courage said, as equal co-producers” with “a deep knowledge of place.”

Artists who are already in the habit of imagining and creating may be uniquely positioned to participate in this process. That’s where social practice art comes in.

Courage explained that “Artists who work in this way have been doing it for years as socially-engaged practice that is engaged by an arts heritage that comes out of the gallery into site-specific art, land art, and a new genre of public art. Artists have been working with people for years on reflecting about the forces that are enacted on place. What is new is calling this a form of placemaking. What’s new is that those outside of the arts sector are paying attention to the practice now. Those that come into placemaking from the planning or built environment sectors won’t necessarily be aware of this heritage and rigorous practice. Some still see art as an add-on, for limited social engagement or beautification gains. Others though are beginning to see it for the embedded and vital practice that it is, which has processes and outcomes that are greater than the sum of their parts.”

For Indianapolis’s purposes in the near future, the idea is to bring people together to reimagine public spaces and to better utilize and take care of the city’s waterways. These events were designed to attract a combination of designers, planners, developers, artists, and other Indianapolis community leaders.

For example, on Oct. 9, at noon, residents of Indianapolis are welcome to join Ash Robinson and Stuart Hyatt, an artist and musician who will be at the Spark welcome trailer at Monument Circle leading a brown bag lunch and discussion about placemaking projects that successfully engage people. The event will conclude with an intentional walk around the Circle, led by Big Car executive director Jim Walker.

Another lunch will take place on Oct. 15, this time with David Engwicht – all the way from Australia – leading the conversation. Engwicht will also be discussing some of his own placemaking experiments on Oct. 21, 6:30 p.m., at The Platform.

For those looking for a little more action, Engwicht and Miami civic advocate Anthony Garcia will facilitate an Oct. 21 workshop from 11 a.m. to 1 p.m. at The Hall. Attendees at this particular event will brainstorm and create their own interventions for space next to waterways in Indianapolis. Teams will even be commissioned to put their plans into action.