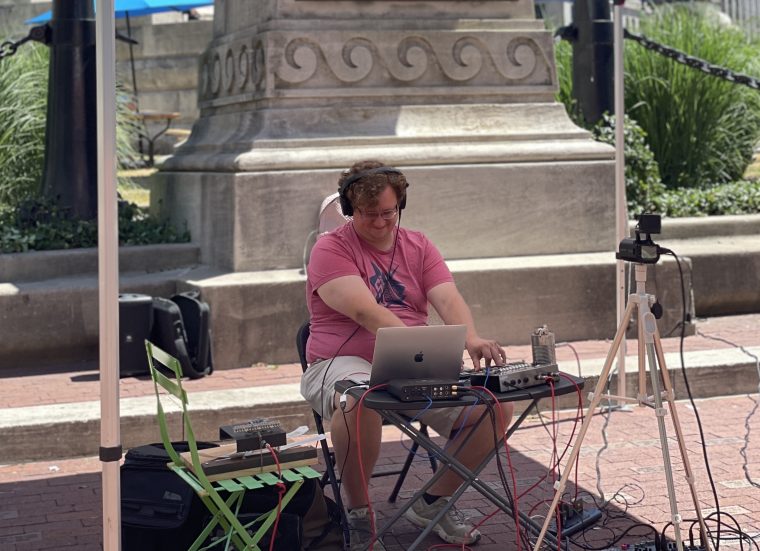 Living near and working downtown, and growing up in Indiana in general, I always took Monument Circle for granted. On the face of it, it’s a cool architectural hub, but it’s also a big traffic roundabout, when it isn’t being shut down for American Ninja Warrior. What I thought the least about in general was the sound there. Sure, there are speakers everywhere, but, up until recently, the most interesting musical moment for me was walking around the Circle near Christmas and playing a game with my buddy trying to recognize which song the muzak engine was trying to imitate.

Even during the original iteration of Spark, in the halcyon days of 2015, when I had the chance to perform on the Circle, the experience was one that felt like glorified busking, playing near the edge of something magnificent, but short of the center. That all changed for me when I played on the Circle earlier this year when Spark started up again. Playing a sound on the central sound system in that space as an artist is a revelation, and gets at the heart of what music can do when it is effectively married to a space.

Evening Embers, which takes place each Wednesday evening at 6:30 through October 26, has been a study in just how easily a space can become an immersive experience when sound becomes a dominant factor in the environment. It has been a chance to allow artists to hear themselves in a way they probably never considered, and for people to engage with the peace of the quieter spots in the central grounds. Throughout the series so far, we’ve heard artists that live right in the zone where the beauty of the sound has equal standing with the content of the music to completely transform the atmosphere of Monument Circle from that of traffic din, to a space of deep calm and exploration.

Performances so far have included Landon Caldwell creating a collage of sound from woodwinds, voice, and sampled instruments, Mark Tester building a whole world out of a single synthesizer, Michael Raintree playing glacially paced abstractions of his songs, Airport People’s plaintive tunes, and Clare Longendyke playing a set that reached back to the very beginnings of ambient music. Most recently, DJ Little Town breathed some drum-heavy life into the series with an hour-long mix of varied instrumentals. 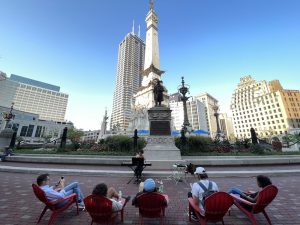 And there’s more to come:

October 12 – Jordan Munson and Rob Funkhouser in duo preceding a huge night of art including an anthology reading of poems written about Monument Circle, and the premiere of No More No Place, which features 40 of Indianapolis’ most talented composers and videographers paired together for shorts to be projected via the Circle’s ten-story building projector.

October 19 – Composer and performer Hanna Benn will bring a touch of the sacred in her vocal improvisations.

October 26 – Classical Music Indy is partnering with SPARK for a screening of the 1920 film Dr. Jekyll and Mr. Hyde, with a live score by Jennifer Page, flute; Eric Salazar, bass clarinet; Allison Vickery, piano; and yours truly on percussion.

It is my hope that as many people as possible will come to experience the art of sound at Monument Circle for themselves and see the possibilities that imagination can bring.

Because, whether you like the art itself or not, hearing it in such a massive context will change the way you view the space, will hopefully open up new ways of thinking about public space, and, perhaps most important of all, it will be interesting. 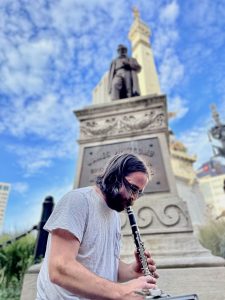